Wedding Rings: All you need to know

The style of your wedding ring set and what they are made of is a very personal choice. Here are some options to look at:

Platinum: When it comes to the type of material a ring is made of, the harder metals are best. This is because your wedding rings need to last a lifetime. One of the most popular metals is Platinum. Platinum is known for its extreme hardness and beautiful white colour that never fades. The only snag is that Platinum comes with a hefty price tag.

Gold: The three most popular shades of gold are Yellow Gold, White Gold, and Rose Gold. The more traditional bride will love Yellow Gold, but Rose Gold is currently very trendy and popular. White Gold wedding rings are usually plated and therefore, it can lose its white colour over time. Whichever metal you choose for your wedding ring, make sure it matches the engagement ring.

Silver: Silver is also a favourite metal for wedding rings because it is inexpensive and beautiful. But it is important to know that Silver can easily scratch.

Titanium: Good news if you have a sensitive skin. You can consider Titanium because it is hypo-allergenic. Titanium is a darker metal but it is super strong and durable even though it has a lighter weight.

Stainless Steel: When it comes to picking the perfect metal for the Groom’s wedding ring we would recommend the good old faithful Stainless Steel because it is inexpensive, strong, durable, hypo-allergenic and scratch resistant. 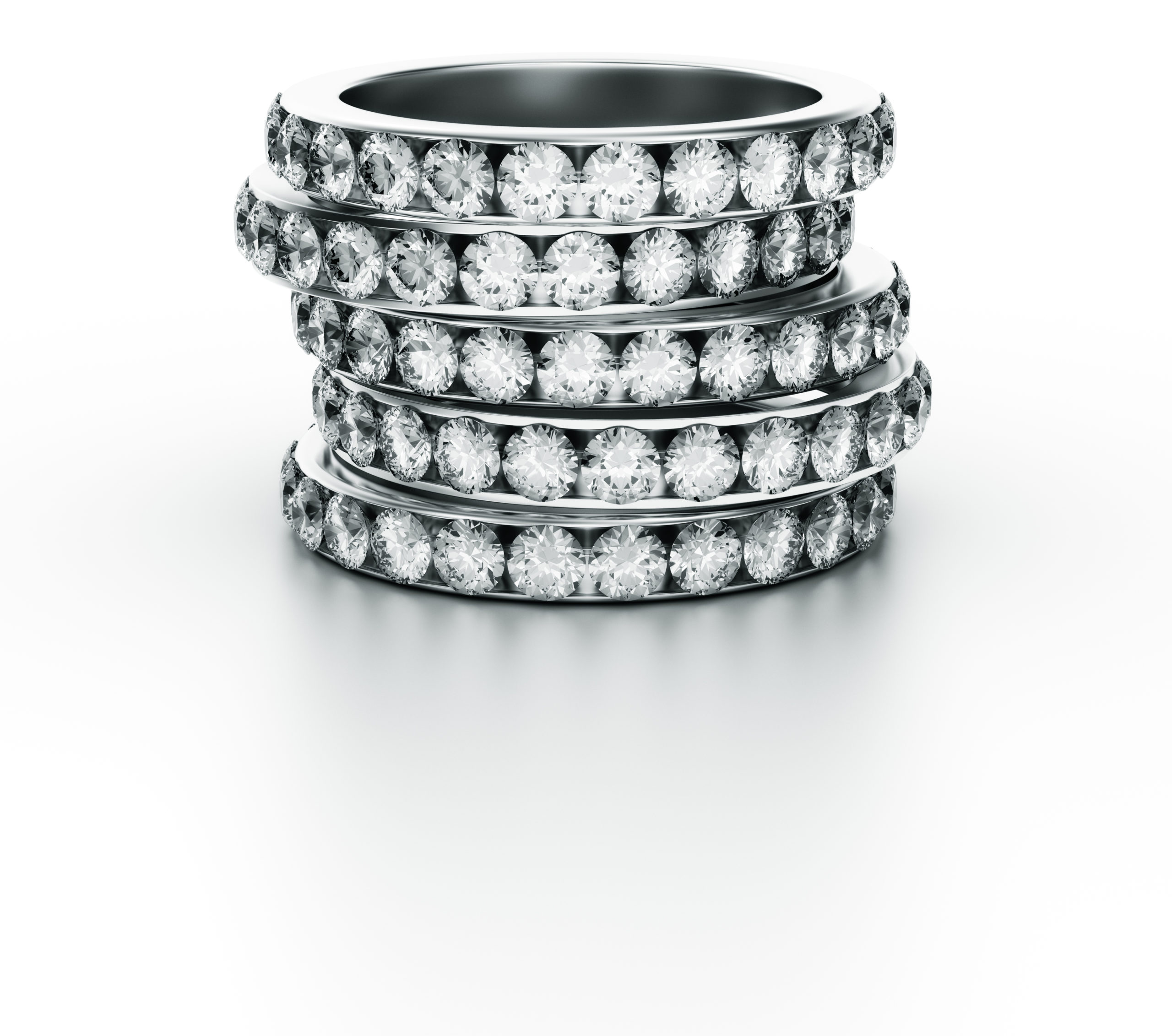 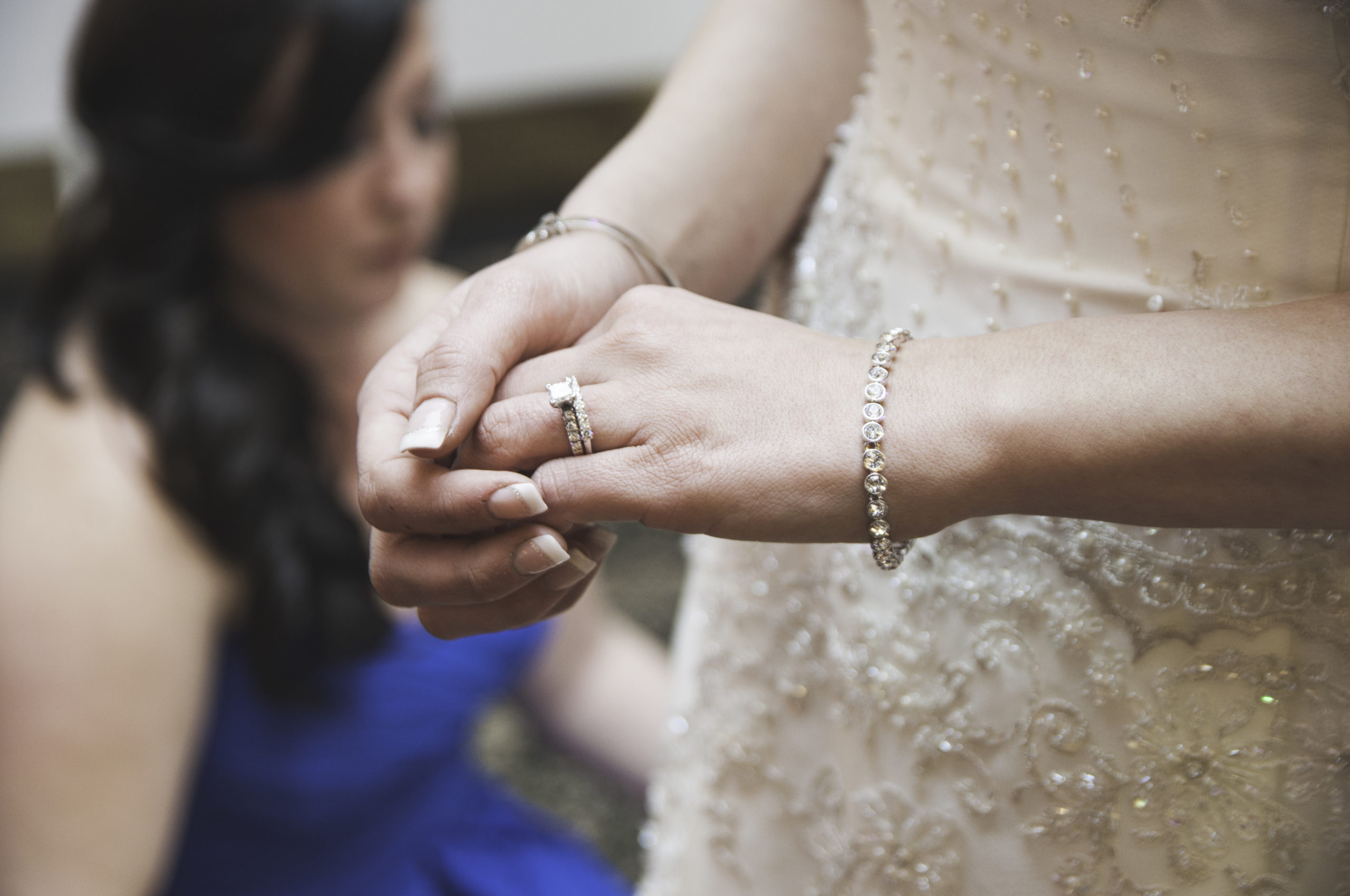 And what about the Gemstones?

The gemstone is the most important feature on an engagement ring, whereas on a wedding ring there are fewer gemstones or even none. Either way, it is important that you consider what type of gemstone you want for both of your rings.

Diamonds: So obviously Diamonds are a girl’s best friend, right? Diamonds are famous because of their beautiful appearance and are known for being the hardest substance on earth. Did you know that the only thing that can scratch a diamond is another diamond? But, make no mistake, diamonds are pricey.

When choosing a diamond, you should give attention to the 4 C’s, which are Colour, Cut, Clarity, Carats. On wedding rings, these gems are usually quite small and paved into the band, so they should be cheaper than the large gems used for engagement rings. 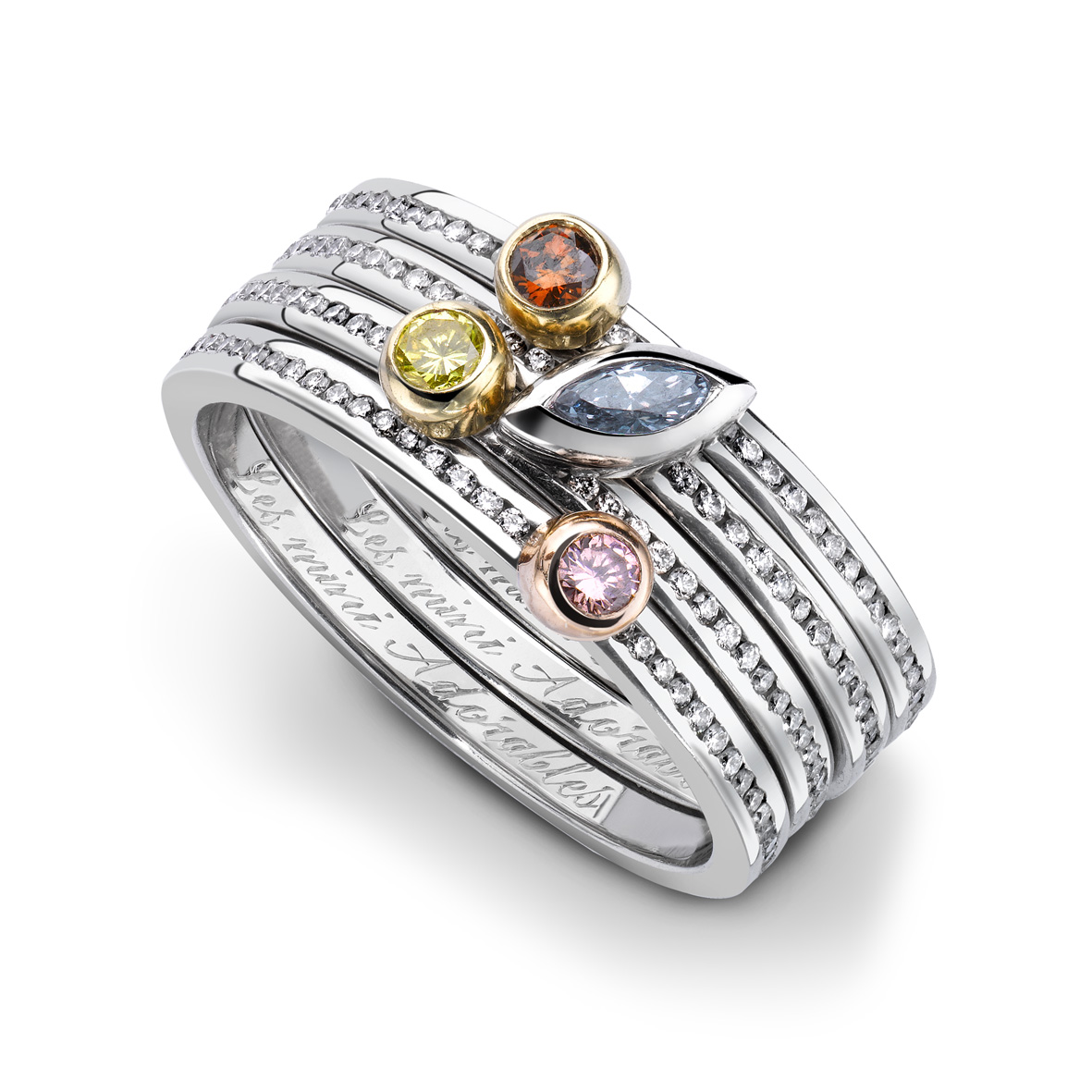 Tanzanite: If blue is your colour, then you will love a Tanzanite stone. This vibrant blue coloured stone is extremely rare and can only be found near Mount Kilimanjaro in Tanzania. Buying a Tanzanite stone for your bride-to-be will not only win her heart over but it is also a great financial investment because of the stone’s rarity.

Morganite: The pretty pink Morganite is a favourite. This rare semi-precious gemstone is known for its excellent durability. Morganites are also found in larger sizes which make gorgeous wedding rings.

Emerald: The unique bride will love the lush green emerald gemstone. The emerald is not as hard as a diamond and should be cleaned often using only warm water.

Ruby: Rubies are also a very popular Gemstone because of their deep red tone and extreme hardness.

How to choose your wedding rings 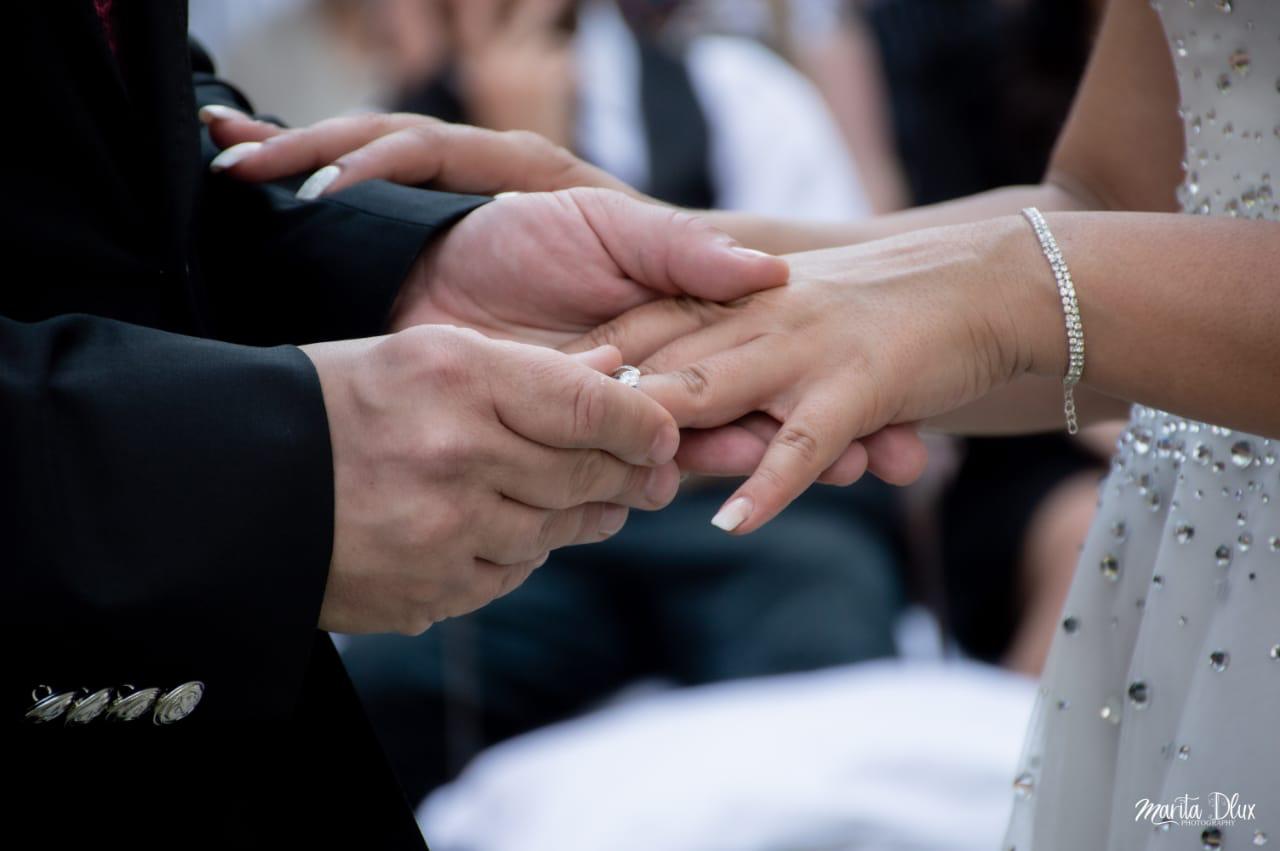 How to Care for your wedding rings

Your wedding rings are made to be enjoyed, and a little extra care will help extend the enjoyment for a lifetime.

Use these expert care tips to extend the shine and sparkle, and keep your stones safely in their settings.

Your peace of mind is worth it.

An interesting read on the origin of Wedding Rings

Wedding rings are a sentiment of love, but no one can really say for sure when this tradition actually started. Some believe that the oldest recorded exchange of wedding rings comes from ancient Egypt, about 4800 years ago. Back then, rushes and reeds, growing alongside the well-known papyrus, were twisted and braided into rings for fingers and other decorative ornaments worn by the women.

The circle was the symbol of eternity, with no beginning or end, not only to the Egyptians, but many other ancient cultures. The hole in the center of the ring also had significance, as it wasn’t just considered a space, but rather a gateway, or door; leading to things and events both known and unknown. To give a woman a ring signifies never-ending and immortal love.

Because the materials that these rings were made of didn’t last very long, they were soon substituted with rings made of leather, bone or ivory. The more expensive the material, the more love shown to the receiver. The value of the ring also demonstrated the wealth of the giver.

The Romans also eventually adopted this tradition but with their own twist. Rather than offering a ring to a woman as a symbol of love, they awarded them a ring as a symbol of ownership. Roman men would “claim” their woman with the giving of a ring. Roman betrothal rings were later made of iron which symbolized strength and permanence. These were called “Anulus Pronubus.” It is also believed that the Romans were the first to engrave their rings.

It was not until about 860 that the Christians used the ring in wedding ceremonies; even then, it was not the simple plain band we know today. It usually was highly decorated with engraved doves, lyres, or two linked hands. The Church discouraged such rings as ‘heathenish’ and, around the 13th century, wedding and betrothal rings were considerably simplified, and given a more spiritual look which was very aptly expressed by a Bishop when he dubbed it a “symbol of the union of hearts.”

Through different stages in history wedding rings have been worn on different fingers, including the thumb, and on both the left and right hands. According to a tradition which is believed to have been derived from the Romans, wedding rings are worn on the left hand ring finger because there was thought to be a vein in that finger, that was directly connected to the heart. This is referred to as the ‘Vena Amoris’ or the ‘Vein of Love’. However, scientists have shown this is actually false. Despite this, the myth still remains regarded by many (hopeless romantics) as the number one reason rings are worn on the fourth finger.

Another theory thought to be behind the ring being placed on the left hand by Christians seems a little more plausible. Early Christian marriages had a ritual to wear the wedding ring in the third finger. As the priest recited during the binding ,”In the name of the Father, the Son and the Holy Spirit”, he would take the ring and touch the thumb, the index finger, and the middle finger; then, while uttering “Amen”, he would place the ring on the ring finger, which sealed the marriage.

A more practically based theory is that the soft metal (traditionally gold for wedding rings) is less worn or injured on the finger of the left hand, due to most of the world being right handed. Further, the fourth finger on the left hand is probably the second to the least used finger on a person’s hands outside of the pinkie finger. With pinkie fingers being small, making a ring with little surface area to decorate perhaps motivated people to then place it on the next least used finger, namely the fourth finger on the left hand, this is roughly the size of the other fingers. 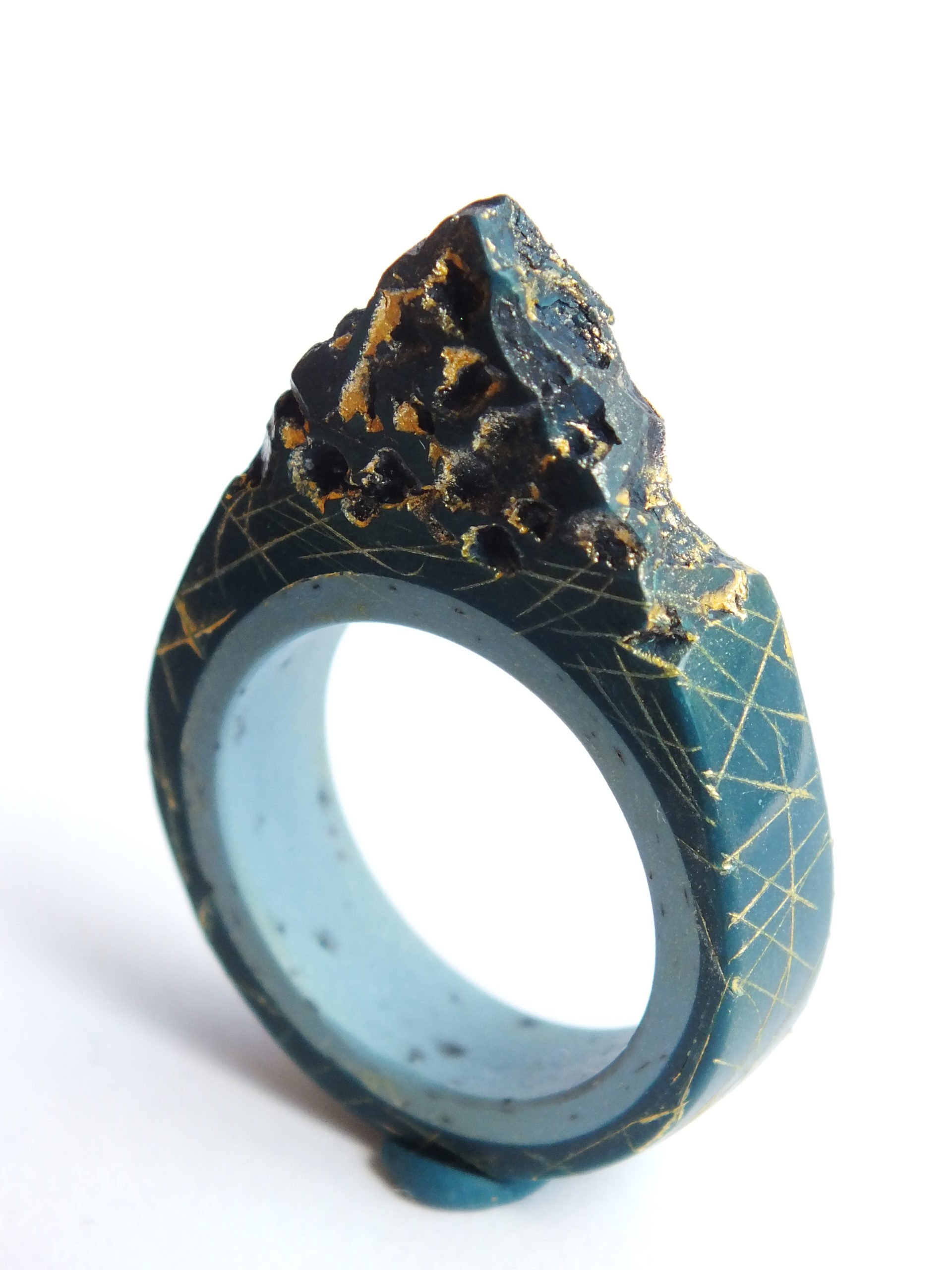